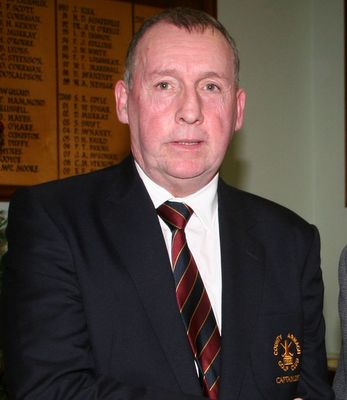 Richard has been a member of County Armagh Golf Club since 1988 and has served as Vice Captain to Pat McAleavey throughout 2014.

Playing off what he describes as “a reasonable” handicap of 12, Richard regularly enjoys the company of colleagues in club competitions as well as playing with his wife Anne in the various mixed events. In his 26 years a member of County Armagh he has represented the club on various teams including the Rossmore Cup winning team of 1995, Pearce Purcell (finalist 2013), Ulster Cup, Mid-Ulster Senior Alliance and South Ulster Senior Alliance teams. He also played in All Ireland mixed teams.

Speaking at the Captain's inauguration, Richard said: "It is both a privilege and honour to be Captain of County Armagh Golf Club. When I think about all the Past Captains of this great club I really mean it when I say that it is a great honour.

“I have been a member of Armagh Rugby Club for 43 years but like so many others from that club I made the trek up the hill to the golf club to become a member.

“County Armagh is a wonderful club and is a great parkland course. Like so many other successful clubs its members are its assets and I look forward to representing young and old alike in my role as their Captain for 2015.”

Richard has selected the very popular member Marty Oliver to be his Vice Captain for the year ahead. Paddy Burns, as Honorary Secretary and Patrick Brannigan as Honorary Treasurer, will also assist the new Captain during his tenure.

Meanwhile, the Captain's Inaugural 9-hole stableford competition played on New Year's Day, was won by Gerry McCreesh, with a winning score of 21points.

Pat McAleavey's Captain's Farewell competition was won by Derek McKeever with a winning score of 35 points.