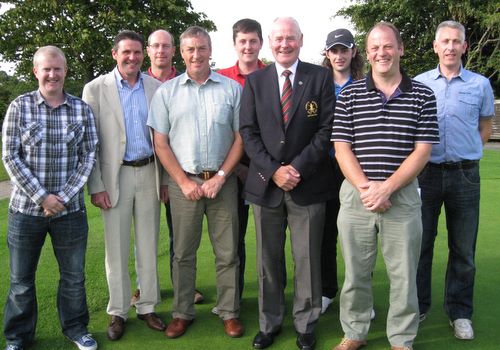 Andrew Millar's distinctive long locks of hair didn't in anyway impede the young man on his way to victory in the Club Stroke competition last week-end.

The Killylea lad, playing off a handicap of eight, shot a superb nett 63 to claim the prize. He opened his round with a bridie no less, and the first shot he dropped was on the ninth. A string of pars followed and but for one further dropped shot at the 16th hole it would have been a perfect round.

Art McCrory shot one of his best rounds of the season, a nett 64 to claim the runners up prize. But the handicap cut was to cost him dearly in his next Gray Cup match klater in teh week where he made his exit.

Jarlath McReynolds led the low handicappers home in Category 1 with a nett 64. Three under par after nine holes he slipped up on 12, 16 and 18 where he had a double bogey six. Tom Fox was runner up in the category with a nett 66, and collected some Two's money on the way with a bridie at the seventh hole.

Kyle Wilson's nett 67 won him Category 2 with D (David or Damien!) Grimley runner up with a nett 68.

Charlie Johnston claimed first prize in Category 3 with a nett 67 and shared the winners enclosure with brother-in-law Norman Mallon on nett 69.

The presentation of prizes will take place on Sat 23 Jul @ 6.30 pm all prizes winners are requested to attend.

Prizes will be added to the players account in the Professional Shop.

A level par back nine after an equally impressive three over front nine secured the July Medal for Gervaise Hughes.

The 11-handicapper booked his place in the club championship in impressive syle with a nett 62 to win the day ahead of the inform low handicapper Niall McGurgan.

Four pars kicked off Gervaise's round before he dropped three shots over the next three holes. But at the turn it was all the damage he had done.

He hit the back-straight in determined fashion, opening with a birdie four at the par four tenth hole, dropped a shot at the next, and a birdie three at 14 compensated for a further dropped shot at 16 for a level par back nine.

Level par was the story of runner-up Niall McGurgan's front nine and with a one under par back nine with a birdie at the last, he deservedly collected the prize with a nett 63.

Another Niall, Niall Brady, claimed first prize in Category One with a nett 65 and Royal School teacher Ian Millar graciously accepted second with a nett 66, collecting a share of the Two's pot on the way with a bridie two at the ninth hole.

In Category Two Neil Monaghan shot a nett 65 including a birdie three at the second hole for his first prize, and Kyle Johnston was runner up with a nett 66.

When Caolan Doyle wins, he wins big. His latest victory in the Sunday Club Stableford competition was won with 46 points.

The 14-handicapper was four points clear of anyone else with one of the biggest stableford scores of the season to date.

From a level par back nine which included a birdie three at teh final hole, he bagged 25 superb points. And with 21 already on the card from a four over par front nine, there was anyone catching the young man.

Jim Wilson, a six-handicapper, did his dutiful best with a level par round securing him 42 points, but he was still way off Caolan's winning total. Jimmy's impressive round included birdies at the second and tenth holes.

In Category One 41 points secured James Conlon first prize. His one over par round was four shots better than second place Shea Brady on 39 points.

CI Mallon and Jim McGeown had to be separated on countback in Category Two when both returned 40points, Mr Mallon winning the day.

With a sizzling three over par back nine and 24 points to add to the 21 amassed over the front nine holes, he was simply untouchable, winning the first of the July stableford events with 45 points - four clear of anyone else.

Niall opened with a double bogey but steadied quickly and included a birdie two at The Quarry to complete an excellent front nine six over par earning him 21 points. And it just got better and better over the back nine with no less than six pars to boost his points tally by a further 24.

Derek McKeever was his nearest challenger and with a steady round deservedly took second prize with 41 points.

In Category One Derek Little also returned 41 points and claimed the honours with a better back nine ahead of Fred Hanna, another 41 points scorer.

And in Category Three Rodney Lynas won with 40 points, with S McGarvey runner up on 39 points.