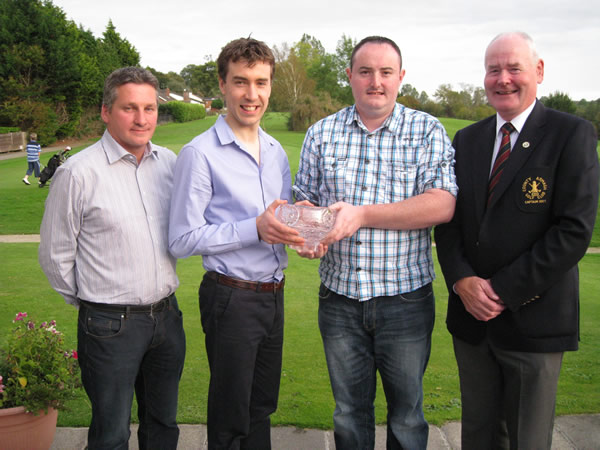 Patrick Kelly is the 2011 County Armagh Golf Club Champion. The 16-handicapper claimed the championship title with a 136 nett score over two successive rounds.

Paul McKeever, from Competition Sponsors, McKeever Chemists, presented the cut glass award to the Armagh man in front of a packed clubhouse on Saturday evening after being announced the winner by Club Captain Tom Calvert.

But it wasn't the applauded position Patrick expected to find himself in when he kicked off his championship round. At the very first hole, he incurred a two-shot penalty after playing the wrong ball, which, on top of a double bogey six, saw him four shots over after just one hole.

However, he accepted his punishment gracefully, went on to complete his opening round with a nett 71 and followed it up a week later with a winning nett 65 to claim the championship by two clear shots.

"There's no way I expected to win the championship after that studid start," admitted Patrick. "But I knew I was still in with a chance at the end of that round and if I could improve on that score in any way I might be in the prizes. To win it is just fantastic," he added.

Qualifying as a prize winner in the Henry White Memorial Open stroke competition back in June, Patrick's club championship round one was a tale of two halves - 12 over after nine holes but recovering well to drop just a further five shots in what many golfers found were very wet, windy and trying conditions. Day two was somewhat more settled and with a nett 65 to leave him four under for his two rounds, Patrick's was always a score going to be hard to beat.

And so it proved - Stuart Stevenson was his nearest challenger taking the runners up prize with an impressive nett 138 off a four handicap.

Second, third and fourth places were infact decided on count back, with Gervaise Hughes - a 10-handicapper carding rounds of nett 72 and 68 in third place, and Andrew McTaggart (11) leading the pack after day one with a nett 66 but managing only a nett 72 on Day 2 to claim fourth prize.

The well-practiced Nat McGeown (9) walked away with fifth prize with rounds of 69 and 70nett and Ciaran Black, added to his considerable haul of prizes this year with a deserved sixth place.