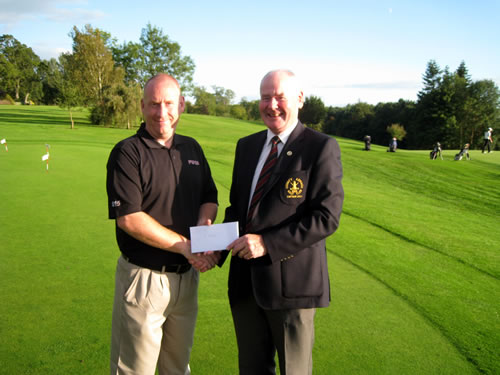 Leo King will not hear of any suggestions his Club Stroke Competition win on Sunday was lucky!

The 17-handicapper produced the best nett score on the day - 63 - to take the honours in the final event of the 2011 summer season.

Four opening pars set him on his way and although he double bogeyed the fifth and eighth holes either side of bogeys seven and nine, he was still only six over at the turn. Par, birdie, par, par kicked off the back nine and despite dropped shots at 14, 15, 16 and 17, he still had done enought to win it.

Niall McGeown's nett 64 deservedly earned him the runners up prize and Jim Bagnall might have been a further two shots a drift with a nett 66 but still picked up third prize.

Marty Oliver and Martin Grimley had to be separated on countback for fourth and fifth prizes respectively, and Jerome Leer rounded up the half dozen prize winners with a nett 68.

John Maguire, a category winner the previous day, collected his second prize of the weekend with the Best Gross, 71.