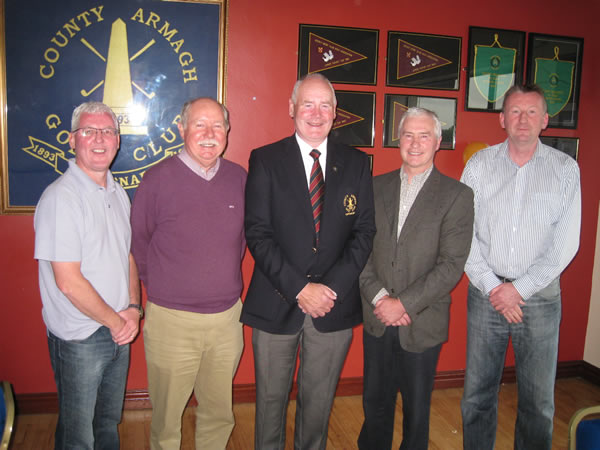 Niall untouchable for May Medal win

Niall McGeown booked his place in the Club Championship after winning the May Medal on Sunday with an untouchable nett 65 score.

Swirling breezes made for difficult conditions throughout the qualifier, but Niall's steady scoring secured the coveted medal prize. Four over after nine holes, Niall used up just a further three shots of a his 12 handicap over the back nine. A birdie three at the course's most difficult 16th hole surely signalled a prize on the day.

Mark Frazer picked up second prize with a superb 66 off his 11 handicap. He was four over after nine holes and in similar fashion to Niall, used up just a further three shots of his handicap on the homeward trek. He too had a birdie - at the par five 12th hole.

Missed putts cost Master Niall Brady on his steady-scoring round but he still secured first prize in Category 1 with a nett 68. Brian Hughes' triple bogey at the last hole was even more costlier but he took the runners up prize in the same category with a nett 68.

Late-finishing Declan McReynolds picked up first prize in Category 2 with a nett 69 and Kieran Campbell, despite a triple bogey at the 8th hole, took the runner-up prize.

In Category 3 it was Terry Hamilton who emerged the winner with a nett 69 and Richard Stewart crept in for second prize with a nett 71, the highlight of his round birdie twos at the 11th and 15th holes.

Craig Talbot deservedly took the Gross Prize with a gross 73. He was one under after nine holes and but for two double bogeys at the last two holes it could even have been even better.