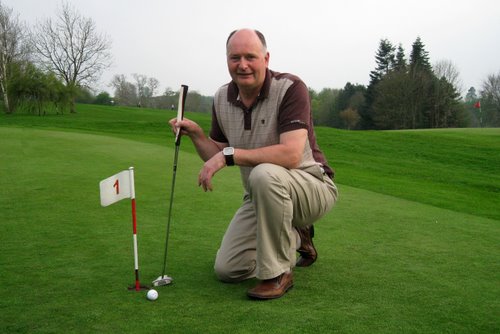 County Armagh Golf Club Competitions Convenor Davy Baird celebrated a hole-in-one during Saturday's Club Stroke competition. His 8-iron shot to the par three 11th bounced just short of the pin before rolling up the sloping green to find the hole

Darren Hughes is fast emerging as the golfer in form at County Armagh as the season gets up and running.

After a category win last week with a nett 65 in the CP McNabb Trophy, he claimed the top prize in the week-end's Club Stroke competition with a superb nett 61.

Darren began his round with a dropped shot at the first hole but this was quickly recovered with a bridie three at the second, and after adding a further birdie three at the fifth hole, it was par golf all the way to the turn. That superb from continued on the homeward trek with par after par recorded until the difficult 16th where he dropped only his second shot of the day. And although he finished in the same way he began, with a dropped shot at the last, Darren's nett score 61 was always going to be untouchable.

Joe McKenna was his nearest rival and on any other day his nett 63 might have taken the top prize. He was just six over at the turn and with some consistent scoring and a birdie three at the 18th hole he was deserving indeed of his runners up prize.

G Hughes led the category prizewinners with a nett 65, a birdie three the highlight of his round and George Bradshaw was runner up in the same category with a nett 66. He had a birdie foour at the 10th hole.

Eamon Mallon's consistency throughout his round earned him the Category Three top prize with a nett 65 and Brian Liddy was his runner up with a nett 66.

Prizes will be added to your account in the Professional's Shop.